Do you ignore these 5 financially destructive signs?

By: sanderspatricia29
on 22nd Jun,2017
Are you guilty of pretending ignorance of these signs that can put your finances on life support? If you’re facing way too many financial problems, and don’t know how to deal with them efficiently, then read this.

In the beginning, you may justify swiping your credit card more often or borrowing from friends to satisfy your impulsive spending behavior. But, as you sink further into the sea of debt, you could start denying that you’re having a tough time dealing with your financial obligations.

Financial troubles sneak in the most deceptive ways, you could ever imagine. But, they do hover over your personal and financial lives with all the tell-tale signs of an impending financial catastrophe.

If you don't want to wreck your financial life, then heed the below mentioned financially destructive signs.

1 You frequently borrow money from friends and banks.

Suppose, you’re a freelance blogger and you’ve taken out a personal loan to pay back a credit card balance worth $6000 and open a savings account. You could be hit with an interest rate of around 10% on the new loan for another 3 years or so.

The motive behind this story is to make you believe that you have little to no savings at all. And this is the reason why rainy days, in your case, implies borrowing more money.

Actually, personal loans are selling like hot cakes, right now. According to Bankrate, average interest rate charged on a personal loan is around 11.3%. However, if you’ve got a picturesque credit report, then you can get a personal loan at as low as 5-6% rate of interest.

Like many people, you may encounter financial hiccups every now and then. However, if you see yourself asking for loans from your acquaintances to pay off your debts, and can’t repay them on time or you don’t altogether, then your finances are in a poor state of affairs. It may also ruin your relations.

2 You live paycheck to paycheck.

Your American Dream has become costlier and that’s evident from your soaring debts.

Nerdwallet.com, a prominent financial website, analyzed data sourced from the Federal Reserve of New York and the U.S. Census Bureau, and found that in the past 13 years, household income grew by 28% while living cost of the Americans shot up by 30%, during the same period. Moreover, since 2002, household debt grew by 10 percentage points faster as compared to household income, adjusted to inflation.

There are some major living costs which consumers have to bear regardless of their paycheck amount like food, housing and medical care. 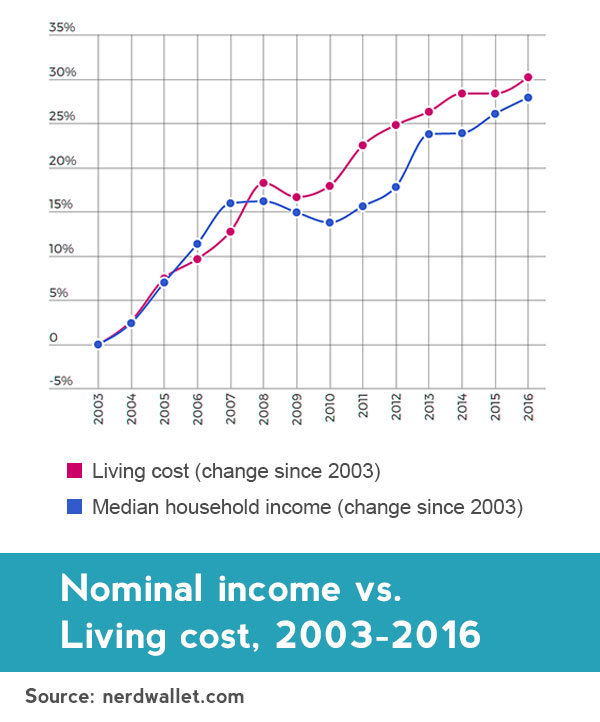 So, if you’re often slapped with overdraft penalties or are struggling to make both ends meet, then you’re not raking in enough dough and hence, forced to live paycheck to paycheck.

A single financial emergency will be sufficient to bankrupt you. So, before you’re struck with a crisis, make sure you have your defenses ready to tackle the unplanned monetary challenges.

Spend less whenever possible and work towards generating more income.

Among the unsecured debts was credit card, one of the costliest debts of our time. Hence, it’s insensible to be a credit card debt revolver. The average American household pays around $1,292 as interest on their outstanding balances, annually. That amount could rise to almost $1,309, if the Federal Reserve increases interest rates, even by a quarter of a percentage point.

If you dish out your plastics for petty purchases, it’s a big indicator that you spend more than you rake in the dough. Over dependence on your plastics and carrying forward your balances from one month to another will inflate your debt way beyond your control, ultimately straining your finances more than it can bear.

When even the fundamental needs of life such as foods or gas become unaffordable, it’s the tipping point where you’ll have to reanalyze your budget and make the necessary rectifications.

The American Express Spending & Saving Tracker (2010) poll data show that 46% of the general population said that they purchased items that wasn’t agreed upon by their spouses. Over a quarter (or 27%) of the poll participants have confessed that they manipulated the amount of their purchases. Moreover, 30% of the participants reportedly hid the purchases they made, from their partners.

So, are you lying to your partner about all that you’re buying? Do you waste your money gambling or excessively going shopping out of leisure?

If you’ve lost track of your finances, spending recklessly, and on top of that, trying to hide your inefficient money management skills, then you’re ignoring a ticking time-bomb. Apart from that, your foolish monetary exploits may be an indicator of something more deeper than the superficial problem.

Consult a therapist to confirm whether or not your reckless spending attitude is related to your mental health that requires help.

5 Your credit accounts are badly in collection.

Like millions of Americans, you too may need help for your debt problems that you just won’t accept.

The data published by the Urban Institute after a research, revealed that approximately 1 out of 3 adults (77 million people) have got their credit accounts put into collections, due to payment default. They also studied non-mortgage debts, for example, car loans, credit card bills, parking tickets, medical bills and child support payments.

You can accept or deny your obligation towards your debts, but the fact remains that you’ll still remain liable to pay back what’s due. Ignoring isn’t a solution.

Tossing away your credit card statements into a corner will only provide you with temporary relief. Rather, you’d aggravate your financial health from bad to worse. The fact is your debt and the debt collectors will soon catch up with you. And keep you trapped in the debt cycle.

So, stop playing hide and seek with your money, and do some serious work.