Thinking of retirement? Answers to get your dilemma resolved

By: Phil Bradford
on 13th May,2015
But make sure you don't default on the monthly payments or else you could risk ruining your credit rating or lose your home over a foreclosure. 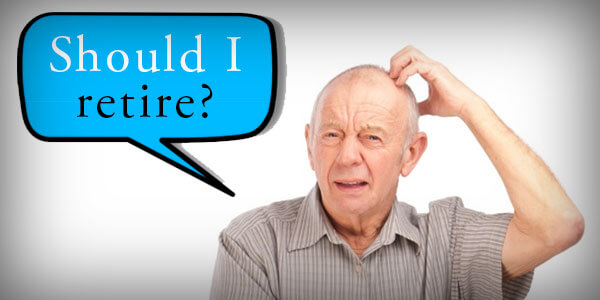 Traditionally, it has been held that retirees would fare well if they pay back their debt before calling it quits to their cushy 9-to-5 job with the steady paycheck they might be receiving.

On the contrary, Tom Anderson, author of Ã¢the Value of Debt in RetirementÃ¢ has said that a chosen amount of appropriate type of debt can, actually be a boon to the financial portfolios of the retirees and even curtail risks to their financial stability to a large extent.

Debt - The kind that matters, always!

Mr Anderson further added that not all debts are beneficial and mustn't be held onto too long. Suppose, you have a credit card that charges you upwards of 10 percent of interest on its loan, for example, 19 percent, then in such a case you will want to get rid of the debt as soon as possible, as it clearly falls in the bad category of a list of financial obligations and certainly not worth it.

However, if you've got a mortgage for which you are charged with 3,4 or 5 percent rate of interest and that the interest paid on the loan is completely deductible as per the federal Internal Revenue Code (IRC), then your mortgage repayments could take its own sweet time to be discharged. But make sure you don't default on the monthly payments or else you could risk ruining your credit rating or lose your home over a foreclosure.

Never mind, an affordable mortgage with low-bearing rate of interest will not only be a money-saver in the form of annual tax deductions, but it'll also allow you, as a retiree, to put your hard earned dollars to work better for you. Moreover, you'll also have the opportunity to diversify your retirement portfolio well.

Increased income - Risking to reach out to better pastures

Generally, as a retiree, you'd be advised to play safe with your portfolio. And one of the foremost issues to handle with care is your withdrawal from the retirement accounts. Ideally, you should not withdraw more than 3-5 percent from your accounts in any given year. Unfortunately, most of the retirees like you have a not-so-ideal nest egg and hence, it is but natural for them to ask for returns that upwards of 3 percent. This could spell trouble because in order to secure increased rate of return (income) you'd gamble for more riskier investment allocation and that is where most of the retirees go wrong, which is not at all desirable.

Still, if you can get a part of your retirement portfolio allocated toward some low-interest debt, then that would ensure a better liquidity for you to play for higher returns in the financial markets. In other words, low interest debt in your portfolio will facilitate increased cash flow wherein you'll be able to use that extra cash to work and earn without taking up excessive risks. The key here is to understand risks. While risk is important, so does return on investment.

Debt in a portfolio

Here's a brief explanation regarding how a mortgage loan can be a judicious addition to your retirement portfolio.

Marc has saved $1 million and has got no liability attached to his name. Now, in case he decides avoid touching the principal and want to make around $45,000 per annum, then his $1 million savings will have to provide him with a ROI of not less than 4.5 percent - something that isn't too much to ask for, as per the records. However, if he's lucky enough to make upwards of 4.5 percent, then he'll get to increase his asset base. Not just that, he'll be able to enjoy better financial flexibility that would directly relate to his liquid portfolio.

On the other hand, if Marc purchases a house for $500,000 without any loan, then his half a million dollar investment will have to provide him with 9 percent ROI in order to earn a neat $45,000 a year. As a result, this might compel him to take excessive risks with respect to his investments.

But what if he buys the same house by paying $100,000 as down on a 15 year fixed rate mortgage that carries a rate of interest of 3 percent on the remaining $400,000? In that case, his tax deductions will cut down the mortgage interest costs to 2 percent. Hence, he would be able to free up $900,000 to invest and if that earns him a profit of 6 percent, then his ROI will amount to $54,000 per year. Deducting the mortgage interest paid him, for example, $8,000 (considering his after tax rate to be 2 percent), then he would end with a taxable income that might be as close as $46,000.

Last but not least, if you are person who has always shied away from taking up risks or have a secure income, then this strategy may not work as favorably as considered for others. This is true if you have a steady, handsome paying pension backing up your golden years, then a debt strategy of this sort is certainly not your cup of tea.

Debt
0
No votes yet