By: Good Nelly
on 24th Oct,2017
Let's find out some creepiest places where you can feel the witchcraft, ghouls, vampire in a chilled Halloween evening. 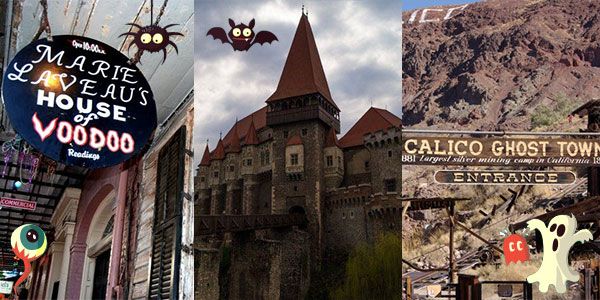 Often, I wonder why people love to enjoy Halloween in a nightclub artificially? I guess, the season when leaves are fading out and falling, a spooky gateway is always the best way to scare yourself instead of overindulging on candies, sweets and neon lights at a nightclub.

Let's find out some creepiest places where you can feel the witchcraft, ghouls, vampire in a shivering Halloween evening.

Explore some haunted places in this Halloween, which will resemble the place and the incident you've seen in the famous TV shows, movies or read in storybooks.

1 Salem, the most popular historic town in Massachusetts

This is one of the most popular Halloween spots where horror events and the true essence of spirits are celebrated over the entire month of October. Try to visit the haunted spots such as hanging re-enchantments, witches' circles, fireworks, and a parade to celebrate the terrifying witchcrafts. Experience the 17th-century architecture, furnishings, and lifestyle at Witch House museum.

Visitors can see Dennison home located at 4 Ocean Ave in Salem (you've seen in the movie - Hocus Pocus). I should say you can recognize Max and Dani if you've seen the movie.

You can find Ropes Mansion in Salem Essex Street in the Chestnut Street District. You've seen the house named as Alison's house in the movie Hocus Pocus.

2 New York City, the oldest cemeteries in the United States

Experience serene and cool breeze at Old Dutch Burying Ground, which is one of the oldest cemeteries in USA. You can also visit Sleepy Hollow cemetery where Washington Irving was buried. If you’ve read the most popular ghost story - The Legend of Sleepy Hollow by Washington Irving, then you should be there to recognize the story once again.

You should book your travel beforehand as it is very much in demand especially before Halloween. Moreover, you can enjoy the astonishing Greenwich Village Halloween party in New York city.

You can also visit 112 Ocean Ave. in Amityville, New York, which is known for the most spooky, horror and murder story ever. You may have seen the place in the movie - The Amityville Horror.

You can see ancient trees and wispy Spanish moss in the area of northwest of New Orleans. This place is famous for the ancient voodoo temples and paranormal activities. Visit Manchac Swamp and New Orleans' famous graveyard.

Try to visit Voodoo shop at 739 Bourbon St. in New Orleans, owned by Marie Laveau's. The film "American Horror Story: Coven unveiled why the Voodoo Queen of New Orleans was a classical personnel.

4 Los Angeles, the City of Angels

Los Angeles is the perfect place to celebrate Halloween. Here you can join the world's largest Halloween street party, museums and many cultural events. This is a perfect spooky destination for everyone. Try to visit Universal Studios where you can visualize some spooky movies and zombie shows.

If you're a die heart fan of famous FX mini-series, then you may visit Westchester Place in Los Angeles. If you're really brave, then try to visit Rosenheim Mansion, which was mentioned in the movie as "L.A. Murder House".

If you're a crazy fan of zombie TV shows, a horror movie buff or a horror story book lover, then you should try to get a real life experience to celebrate the actual essence of Halloween. It is the time when everyone wants to find out the witchcraft. So, plan early and book your tour otherwise, you may lose the chance to be there.

An iconic San Francisco tourist attraction Alcatraz Federal Penitentiary opened in the 1930s. Famous Al Capone and other notorious gangsters and criminals served time there before it closed in 1963. It was a maximum security prison turned into a park now on the island known as The Rock. Yeah, it's the same places shown in the blockbuster movie “The Rock”, acted by Sean Connery.

Practically, there are no official ghost tours. But visitors can go for Alcatraz Night tours ($25 - $43). Visitors can feel the creepy big house the way it was experienced by the prisoners. The ghostly crying and moans can be heard in cell A, B and isolation cell 14D, where an inmate was found strangled. It was known that one night before the incident, the inmate was screaming about a creature which was trying to murder him.

Say hello to your nightmares if you ever visit Sleepy Hollow in October. It is known for the Washington Irving’s infamous Headless Horseman - Horseman Hollow, which is held in the historic Philipsburg Manor. Undoubtedly, it is a hair-raising adventure for all ages, but is likely too intense for children. The Haunted hayride through the hollow is appropriate for the whole family together, and you may still have a glimpse of the legendary Horseman.

You can also enjoy the fall activities at Sunnyside. You’ll find storytellers on the grounds, and also there are colonial games, hot cider and doughnuts. In the evening, visitors can head to Croton-on-Hudson where they can view the Great Jack-o-Lantern Blaze. It is an awesome view where more than 5,000 carved pumpkins illuminate the darkness.

You’ll find both in Moundsville. Visitors will enjoy the chilled evening in this spooky destination, named after Grave Creek Mound.

One of the most important attractions is the big kahuna, the Gothic-style West Virginia State Penitentiary. You’ll remember the movie “Shutter Island” and its mental hospital, by viewing the stone leviathan. It witnessed many riots, fires, escapes, and 36 murders since 1866.

Now, visitors can tour the hallways, and if you are brave enough, you can even spend the night. There’s a small haunted house and kid’s walk, too.

People will love Transylvania at the time of Halloween. Though it isn’t originally connected with any vampire, but the town has embraced the popularity originated with the character “Dracula” by Bram Stoker. You’ll find lots of Dracula printed souvenirs from the stores there.

The town is constructed on ancient Indian burial grounds back to 1400 A.D. You’ll hear stories about a local legend - a half dog half gargoyle guardian ghost, who wanders the local burial grounds.

The burial mounds in Transylvania are marked, so you can head to local Poverty Point to and check out mounds that are open to the public.

The stunning landscapes of Ghost Ranch’s 20,000-plus acres will mesmerize any person in the world. In addition to that, you’ll also hear stories about evil spirits roaming around the area. People say that the cattle rustlers spread that story to keep people away from the ranch. The story tells about “Rancho de los Brujos” (ranch of the witches), which later become Ghost Ranch. There are also tales about monsters and “earth babies,” red 6-foot creatures from the red sand that howled like babies.

Calico is an old west mining town constructed in 1881 during the largest silver strike in California. It has 500 silver mines, which produced over $20 million silver ore over a 12-year span. But unfortunately, Calico town became vacant since silver lost its value in the mid-1890's. Since the population moved from there, It became a "ghost town."

Walter Knott owned Calico in 1950 and restored the town except the five original buildings. Calico become a State Historical Landmark (No. 782) in 2005 and was named Silver Rush Ghost Town. The announcement was made by the former California Governor Arnold Schwarzenegger.

Now it is under San Bernardino County Regional Parks system. Visitors will get to share its rich history and feel the natural beauty of the surrounding desert. Calico Ghost Town also has restaurants, shops, campsites, and provide outdoor recreation to few areas.

There are more famous, creepy places across the country where you can spend the Halloween, along with your loved ones. Be sure to get free gift coupons when you collect your entry tickets. Also, collect special souvenirs when you visit a place. Happy Halloween :)