10 Facts about how the Great American Dream is killing you

By: Phil Bradford
on 12th Apr,2019
The American Dream has become costlier and more elusive than ever. If you want to know more about how it affects you and your children. Read here for the mind-boggling facts. 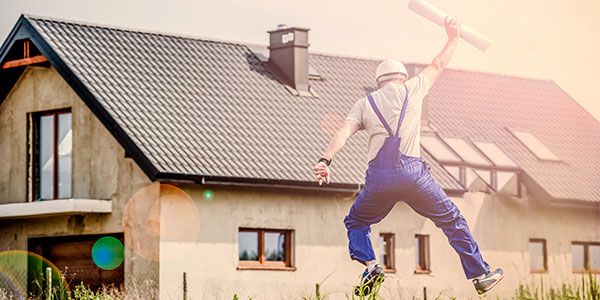 The traditional definition of the Great American Dream signifies that every American should have an equal access to opportunities that propels them towards a prosperous and successful life. The foundation of the American Dream is built upon grit, hard work and initiation.

The American Dream: What is it today?

In a nutshell, the American Dream today means the following:

The irony is that the American Dream is still a feasible idea. But, it has undergone some huge changes over the decades. The changes were so much that it could hardly be an American’s dream any longer, especially for the millennials and their children.

The cost of the American Dream now

The American Dream, as analyzed by USA Today, would cost an average family of four almost $130,000 per annum. Interestingly, the U.S. Census Bureau has found that only 16 million U.S. households, i.e., around 1 out of every 8 person, made that much in 2013.

That cost is way too much in a nation where the median household income is around $51,000. Hence, it’s clear that for most Americans, the American Dream is far more elusive than what it was during the 1950s.

Is the American Dream dead or alive?

In 1931, James Truslow Adams came up with the idea of the American Dream and wrote extensively about it in his book narrating the fairy-tale-like life of every American who works hard.

That promise of a rich life still exists for the 75.4 million millennials aged between 18-34 years, as of 2015. However, fresh hurdles stand in their way to successfully realize their dreams. Millennials, like any other group of the population, may get disheartened as they start figuring out that hard work alone isn’t sufficient to be successful. Many of them may have a tough time making both ends meet and, start wondering: Is the American Dream dead or alive? Or, are they just dreaming under the hot, torturous Sun? 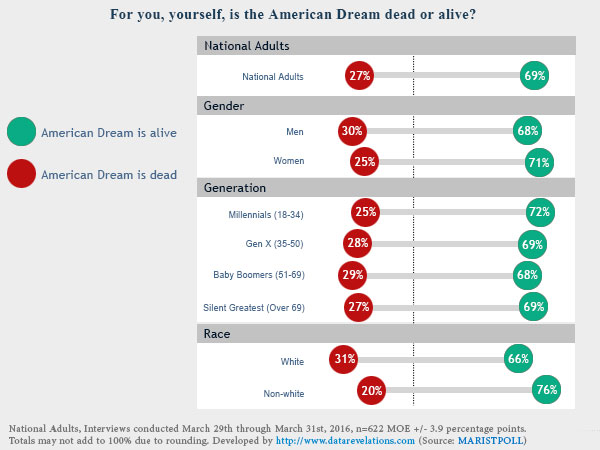 10 Killing facts about the American Dream

If you’re about to retire on or beyond 2033, then make sure you have loads of cash stashed in your bank. Like you, a lot of Americans consider social security as their financial harbinger during their golden days and plan their retirement revolving around the same idea. But, come 2033, and the social security benefits are likely to cover only 75% of the advantages provided to the recipients.

So, you may have to continue working beyond your retirement days to cope with your living costs. For that, you’ll have to work on your personal financial well-being from the start.

Over 1/5th of all college graduates are employed in a low wage jobs. As a result, the dough they make in a year is lower than $25,000. The prime reason for such a rickety paycheck is that the number of graduates surpasses the number of jobs that requires a college degree. If you think you can’t take it anymore and want solutions to your poor paycheck issues, then you’ll have to get engaged in a side gig. This would help you to supplement your income and improve your financial health.

One of the parts of the American Dream is building a cosy home and a family that fits into it. However, that same house could be the culprit for many divorces. Out of the 3 top issues related to any successful marriage, sharing household chores is one of them. A lot of friction comes into play when deciding who’s going to do what. For example, who’ll mow the lawn, do the laundry, or clean the dishes, are some of the contentious issues that are discussed at home. The friction between the partners become so intense that it reaches a point where it seems unbearable, and work provides a warm respite from that chaotic place you’ve built to call it your home.

People return from work, complain about the hectic day they had, to their partner, have a fight over petty household chores, then return to work the next morning only to share anecdotes with their co-workers about the fight they had with their spouse. It’s an eternal cycle with no end in sight. Poor paycheck coupled with a tussle-filled spousal relationships help in nothing but add insult to injury.

4 Amount of dough is lower than before

Regardless, of what your employment scenario is, most likely the amount of dollars you make is never going to be enough for you to meet your American Dream benchmark. Simply put, the American Dream now costs around $130,000 per annum.

Sadly, the median American household income is said to be near about $50,000 per year. So, like any other average American, you may earn $80,000 less than the required amount, necessary to realize your Dream.

A lot of Americans lose the race to retire with the person with whom they’ve shared the American Dream. The reason is divorce. Considering, the average rate of divorce in the country to be at 40-50% in case of couples marrying for the time, you should take a closer look at the person with whom you’re sharing your home, paying for your children’s upbringing, or investing your dollars. The catch is one of you most likely will either divorce your partner or get divorced, at least once in your lifetime.

Millennials raising children will have to invest almost a quarter million dollars on them, by the time they turn 18. To help their children hit the ground running in their quest to achieve the American Dream, a parent will have to save at least $241 a month right from the time their children are born. All this would be needed to pay for a state school education worth $33,000.

8 Vacation is a burden not a leisure

The average cost of vacation for a family of four is $1,200 per person. As already discussed before, people make $80,000 less dough than minimum amount required to live the American Dream. At such a dismal state of affairs, Americans can ill-afford to spend their dollars to sleep at some distant beach, for five days at a stretch and do nothing but sleep! Rather, they’ll have to stick to their home to do that. It comes at no cost at all.

The Auburn University researchers found that students gained more or less 37 lbs by the time they graduated out of college. It happens mainly because of late night studies, too many sodas/caffeine intake, ill-advised cafeteria menus and a complete, sedentary lifestyle.

Moreover, most of the people find it unaffordable to buy good quality food that is most healthy for them. Ultimately, college has become a place for booming opportunities that invites two things - a probable career development and an upcoming health hazards.

10 You graduate with a student loan repayment plan

Around 67% college graduates are grappling with student loan debt. Most of the borrowers are aged well over 30 years and are expected to keep making the repayments till or beyond their retirement. Almost 3% of the student loan borrowers still paying off their loans are head of their households, aged 65 years or higher.

The total repaid by them was around $15.2 billion in 2013. It’s quite evident that the American Dream is in a crisis and students are graduating out of college with excessive amount of indebtedness.

The American Dream was all about securing a highly-paid, stable job that would pay for your home, took care of your and your family’s living costs, provided a secured retirement, and made things affordable for you. It signified a home in the suburbs with your lifelong partner and a dog.

But that isn’t the case anymore. Rather, you’d have to focus on eliminating the hurdles instead of looking for comforts. Today, the Great Elusive American Dream still exists, but it has undergone a sea change, ever since it was conceptualized and practiced.