By: NathanielCopeland
on 30th Apr,2014
The cost of higher education has soared over the years and has reached record high figures in the last 3 years. This was up by 5. 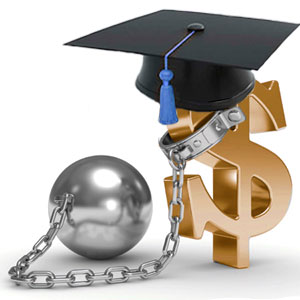 The cost of higher education has soared over the years and has reached record high figures in the last 3 years. Fresh graduates are walking out of their classrooms and into the world only to discover the solemn truth about how costly their education actually is. A report published in November of 2011 by The Project on Student Debt stated that the average debt load borne by a senior graduating out of college was $25,250, the highest figure on record. This was up by 5.2 percent from $24,000 in 2009.

The census data gathered within the same timeframe also showed that the gap between debt load and earnings continue to decrease. Over the last 5 years the median income of a bachelor’s degree holder has continued to shrink while debt amounts have steadily increased on the whole. Adjusting inflation rates into the equation shows that while the debt load for graduates have gone up by 11 percent their median earnings have taken a dip by 3 percent.

Currently, the total student debt load of the nation has crossed the 1 trillion mark which is more than the credit card debt load being borne by the economy. Student debt defaulters are also on the rise and as many as 27 percent of all outstanding college loans are late by 30 days or more. With the sharp rise in the number of default cases, students who have failed to make their timely payments are asking what the implications are. Here is a list of questions that student loan defaulters commonly ask.


Q. What are the tax implications of defaulting on a student loan?

A. A lot of people depend on tax refunds as an additional yearly boost to their personal finances. In case you have defaulted on your student loans, the tax refund implications may vary. Defaulting on a federal student loan would mean that the government can take your tax return to offset your outstanding loan balance. On the other hand private lenders cannot take away your tax refund for defaulting on a student loan.


Q. Can I have my wages garnished if I default on a student loan?

A. Defaulting on a federal student loan would mean that the government can take a limited portion of your paycheck towards offsetting the outstanding balance of the loan. Federal garnishment is limited to 15 percent of your disposable income. The government cannot garnish more than 30 times the present federal minimum wage. Private student loan defaulters can only have their paychecks garnished by court order and the garnishment limits are as per state law.


Q. Can I have my Social Security and other federal benefits garnished?

Q. Can I be sued for defaulting on a student loan?

A. The federal government as well as private lenders can both sue you in case you default on your student loan. The Statutes Of Limitations don’t apply on student loans, either federal or private and the debt is not time barred. Therefore, your creditors are legally capable of suing you indefinitely. Private student loans are often handed over to collection agencies who can sue you as well. In case a private lender can obtain a judgment against you, they can garnish your wages and put a lien on your assets and bank accounts.

Q. Can I have my student loan discharged through bankruptcy?

A. Unfortunately, filing bankruptcy will not help you get out of student loan debt. Under federal law, unlike all other debts, student loans are non-dischargeable through bankruptcy. Although this may be true, student loans are not impossible to discharge. You would have to prove that the repayment of the debt “will impose an undue hardship on you and your dependents”. Courts use different tests to gauge the level of hardship a borrower might be facing. The most common test among them is the Brunner test.


Q. Is there any way to stop lenders from garnishing my wages?

A. Defaulters have a single shot opportunity of ‘rehabilitating’ their loans through paying 9 out of 10 consecutive, fully voluntary, timely monthly installments. Once the loan in default has been rehabilitated, wage garnishment and tax refund offsets are removed and the borrower is allowed to go in for income based monthly repayment schedule.

Debt
0
No votes yet